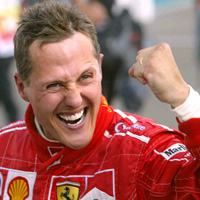 No one in 1979 could have imagined that the Drivers title just won by Jody Scheckter was the beginning of the longest absence of Scuderia Ferrari from the top of the Formula 1. The Eighties, with turbo engines protagonists of the stage, become the undisputed realm of the British teams Williams and McLaren, with only two exceptions in the Drivers title, the wins of Nelson Piquet with Australian team Brabham in 1981 and 1983. The decade leads to Ferrari two Constructors titles in a row, in 1982 and 1983, but at the cost of many disappointed expectations and, more importantly, some painful losses.

In 1982 in Zolder, the acrobatic and beloved Canadian driver Gilles Villeneuve loses his life and at Hockenheim, few races after, his teammate Didier Pironi sufferes an accident that ends his career. In 1988, on February the 14th, Scuderia Ferrari also loses the charisma and personality of its founder Enzo, dead at 90 years old, suffering a leadership vacuum that will be filled only in 1991 with the arrival, from Fiat, of Luca Cordero di Montezemolo, former Racing Team chief at Ferrari during the mid-Seventies.
The Nineties seem to open with a promising omen for Ferrari, thanks to the banning of turbo engines and the arrival of a winning driver, Alain Prost. The Frenchman struggles for the title in 1990, his first season with Ferrari, losing to the hated rival Ayrton Senna in the last race at Suzuka, following a collision between them, which prompts endless controversy. In 1991 the relationship between Prost and Ferrari breaks down: Prost is fired before the Australian Grand Prix for having publicly called his car “drivable like a truck”. Other bad seasons follow, with two talented drivers Alesi and Berger unable to compete for the title (only two G.P. wins from 1992 to ’95) because of their cars, technically inferior to the best teams of that period, McLaren and Williams. In the attempt to supplant McLaren, Ferrari hires John Barnard, designer of the unbeatable McLaren, but with poor results.

The slow reconstruction of the Ferrari begins in 1991 with the arrival of Montezemolo as president , followed two years later by that of another key-figure, the French Jean Todt as Racing Team manager. This pair of extraordinary leaders will be joined from 1996 by an another great trio coming from Team Benetton, world champions in 1994 and ’95: the German driver Michael Schumacher, the South African designer Rory Byrne, and the British Ross Brawn as technical supervisor. In retrospect, 1996 can be really considered the sunrise of the Ferrari’s new golden age, an era that is unequaled in Formula 1 history and with it allows Schumacher to become the most successful driver of all time, outdoing even the five Drivers world titles record established by Juan Manuel Fangio in 1957.
TO BE CONTINUED