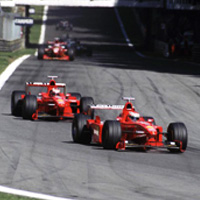 At the time of his arrival at Ferrari, Schumacher is, no doubt, the present and the future of Formula 1. He has already won two consecutive world titles and he’s still 27 years old. He’s fast under all driving conditions, he’s enterprising and bold. In 1994, Schumacher wins his first title at the end of a very difficult season, marked by the tragic Imola weekend (with the deaths of Senna and Ratzenberger), the disqualification of his Team Benetton car in England and Belgium and, finally, the resounding collision with rival Damon Hill during the last race in Australia. The 1995 title, second in a row with Team Benetton, is easier for Schumacher, with 9 wins out of 17 races and a nearly 40-point gap on runner-up Hill. Ferrari relies on the best of the Formula 1 aces of the moment, with the Irishman Eddie Irvine flanking Schumacher. But the drivers cannot do it all themselves: even from the technical point of view. In fact, 1996 is a defining year for Scuderia Ferrari, as they definitively abandon the historic 12-cylinder engine and move on to 10-cylinders, more suited to the design of the modern circuits . This factor, combined with staff change at the top of the car design organization results in several mechanical failures during the season. Nevertheless an undeterred Schumacher is a winner at three Grand Prixes.

In 1997, recurring controversy regarding excessive aggressiveness on the part of Schumacher, causes an accident in the last race of the season, the European Grand Prix at Jerez, with the direct rival for the world title, Jacques Villeneuve (son of the former Ferrari driver). Schumacher, leading by one point before the race, has the worst of the battle: his Ferrari breaks down while Williams of the Canadian is able to continue, crossing third at the finish line and handing the title to his driver. Two weeks later, Schumacher will be found guilty of a dangerous maneuver by the FIA (Automobile International Federation), which will take away all his points in the standings, thereby depriving him even of second place.

New runner-up place for him in 1998, when the German, author of an amazing comeback in the second half of the season, leaves the title to the Finnish Mika Hakkinen (McLaren) again in the last race of the year, in Japan, this time because of an engine shutdown at the start. It’s just Hakkinen, until his retirement in 2001, the most talented and competitive opponent of Schumacher and Ferrari on the road back to the top. Miraculously returning to racing after a terrible accident that occurred in Australia in 1995, the Finn demonstrates all of the qualities of a champion, combining coolness and tactical acumen with a driving style that is faster than others.
1999 opens the winning era for Ferrari, with the unexpected Constructors title (the first after 16 years) won in the year of the only serious accident Schumacher has in his career. At Silverstone, the German brakes his leg crashing into the barriers and is forced to forfeit five races. He is replaced by the Finnish Mika Salo. The extraordinary performance of Eddie Irvine (which will leave the Drivers title to Hakkinen only at the last race of the season) will, however, running the Ferrari to McLaren in the Constructors standing. Schumacher’s return, with two races to go, nets two second place finishes, crucial for the team success: it will be the first of six consecutive Constructors titles until 2004.

In 2000, the long ascension of Ferrari to the top, finally comes to an end. Michael Schumacher takes back the Drivers title to Maranello after 21 years from Scheckter. Ended the controversy surrounding the accidents, paid the duty with bad luck and changed teammate (Irvine is replaced by Rubens Barrichello), the German starts the season at full speed, reaching three consecutive wins and four in the first six races. In the middle of the season he will suffer a small crisis, where Barrichello’s win in Germany, at the end of an incredible race, will be crucial to contain Hakkinen’s comeback. Hakkinen, defending World Champion, will take away some satisfaction, however, as the fantastic double overtaking of Schumacher and Zonta at Spa, during the Belgian GP. From the Hungarian Grand Prix onwards, however, Schumacher will become unbeatable, capturing four wins and two second places in the last six races of the season.
TO BE CONTINUED