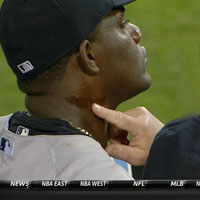 In light of Michael Pineda’s recent ejection and suspension for having pine tar on his neck, here are 3 more players caught trying to get an edge.

1. George Brett
In another case of illegal pine tar use, on July 24, 1983, George Brett hit a go-ahead two-run homer off of Goose Gossage against the Yankees to put the Kansas City Royals up 5-4. After Brett rounded the bases, Yankees manager Billy Martin asked the umpire to measure the amount of pine tar on the bat because the rules state that no substance can go more than 18 inches from the knob. The umpires measured the amount of pine tar, which is a legal substance used by hitters to improve their grip, on Brett’s bat and found that it extended almost 24 inches from the knob. The home plate umpire, Tim McClelland, signaled Brett out which ended the game in the Yankees favor. Kansas City successfully protested the decision, and the game was continued at a later date ending with a Royal victory.

2. Gaylord Perry
Even though he is in the Hall of Fame, Gaylord Perry was notorious for cheating on the pitcher’s mound. Known for throwing a “spit-ball” Perry also used foreign substances such as Vaseline to make it almost impossible for batters to hit the ball. Despite all of this, he was only ejected once on August 23, 1982 for doctoring the ball.

3. Sammy Sosa
On June 4, 2003 Sammy Sosa broke his bat after hitting a ground ball. Upon inspection of the bat, the umpires found that the bat had been “corked”. This is done by hollowing out the middle of the bat and filling it with a lighter substance (most commonly cork) in order to make the bat lighter and easier to swing. Sosa was ejected and the runners that advanced on the play were forced to go back to their bases. He was suspended for 7 games.