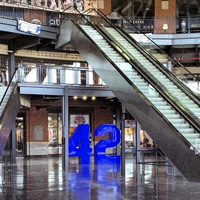 Today, April 15, is the 67th Anniversary of the day Jackie Robinson broke baseball’s color barrier and played his first game for the Brooklyn Dodgers. While a controversial day at the time, today it is one of the most celebrated days throughout the season. Even though baseball retired Robinson’s number “42” back in 1997, today, players throughout the league will wear it in honor of the deceased Hall of Famer. One of the league’s biggest tributes to Robinson is the Jackie Robinson Rotunda which is one of the main attractions at Citi Field, home of the New York Mets. Pictured below, the Rotunda has many pictures and quotes from Robinson and also includes a giant blue 42 where many fans like to have their picture taken.