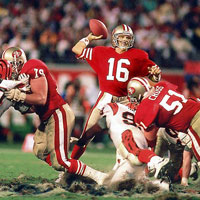 We celebrate the week before the Super Bowl, highlighting the career and records of some of the champions who have been known to be pivotal players in the final game of the NFL season. Football history, in fact, has many amazing players who, despite having great careers never managed to win a title (Thurman Thomas, for example, in spite of 4 attempts, or Dan Marino).

The first portrait is dedicated to a quarterback who has inspired generations of players and the dreams of millions of fans (including me) with his sporting achievements and, at the same time, with his quiet smile and his sobriety off the field. If it is true that the real class of a QB is seen in the moments of maximum pressure, then it is right to consider Joe Montana the best of all time in his role. Born to Italian roots (the original surname of his grandparents was Montani) in 1956 in New Eagle, Pennsylvania, “Joe Cool” (as he will be nicknamed for his amazing ability to perform at his best in decisive moments) plays in the glorious College of Notre Dame: initially relegated to the margins of the team, new coach Ian Devine catches a glimpse of something special in him, promoting as starting QB. Montana is forever etched into the history of his university conducting some amazing comebacks. In 1975 he throws 129 yards in 1 minute and 2 seconds, going from 6-14 to 21-14 end against North Carolina. In the same year against Air Force from 10 -30 to 31-30 final, in ’77 against Purdue he throws 154 yards in the last 11 minutes going from 14-24 to 31-24 final. Montana takes his leave from the academic world by winning the 1978 Cotton Bowl 35-34, with the decisive drive capped at 2 seconds from the end, and being named Most Valuable Player of the final.

These numbers, however, fail to dispel the concerns that NFL scouts regarding physical ability and the strength of his arm: this explains the result of the 1979 draft, where Montana is chosen by the San Francisco 49ers during the third round, as the 82nd player! In his first NFL season, Montana takes only 23 snaps, but during the the middle of 1980 season becomes the starter and on December 7 of that year, against the New Orleans Saints, he records the first of his 31 last quarter winning comebacks that would characterize his career. Montana will remain in California until 1992, making a significant contribution to the creation of one of the strongest offensive unit in NFL history, alongside champions Jerry Rice, John Taylor, Roger Craig, Dwight Clark and Marcus Allen, to name a few. Montana with the 49ers reach the Super Bowl four times (1981, ’84, ’88 and ’89), winning them all and winning three times (record) the award for MVP of the game. In the four finals he will complete a sensational record of 83 completed passes out of 122 without ever having yelded an interception or fumble.

While marching with amazing regularity through the regular season (win two MVP awards in ’89 and ’90), Montana is exalted in the playoffs, where the tension skyrockets and he can assert his extraordinary ability to remain clutch up to the last second. Two, in particular, are the plays that will remain throughout history, to the point of earning two nicknames which seem definitive: “The Catch” and “The Drive”. The Catch is staged in the last seconds of the 1981 NFC Championship against the Dallas Cowboys: Montana, running to the right edge of the field and hunted by the opposing defense, throws a perfect parabola that settles the ball in the hands of Clark in the end zone for the touchdown that gives the 49ers the victory 28-27.

The Drive  goes on stage in the final drive of the Super Bowl XXIII against the Cincinnati Bengals, with the latter ahead 16-13 with 3 minutes and 10 seconds to go. Montana is forced to start from his own 8 yards line, but with a mind-blowing series of 8 completions goes on for 87 yards and, instead of settling for the field goal of the tie, throws into the end zone, completing his masterpiece at 34 seconds from the end with a touchdown pass to Roger Taylor. 20-16 and NFL title to San Francisco, with the audience in a frenzy and Taylor driven to tears on the sideline.

In 1993, the 49ers decided to hand the reins to Montana’s talented backup, Steve Young, and the aging champion went to the Kansas City Chiefs, leading the team to the playoffs in both seasons. Montana retires at the end of 1994 with 8 Pro Bowl caps, 3,409 completed passes of 5,391, 273 touchdown passes, 139 interceptions, 40,551 passing yards, 1,676 rushing yards and 20 rushing touchdowns, but it is in the playoffs that his numbers become superlatives. Only in the postseason, he completed 45 touchdown passes (record), 12 games with a passer rating above 100 (record), 5,772 passing yards (second behind Tom Brady) and 6 playoff games with over 300 yards thrown (record shared with Kurt Warner). In the four Super Bowlplayed, Montana completed 83 of 122 passes for 1,142 yards and 11 touchdowns with no interceptions or fumble, as said. Enshrined in the Football Hall of Fame in 2000, his uniform number 16 was retired by the 49ers.

To watch Montana in action, click here: The Drive / The Catch