Superbowl people 3: San Diego and the curse of 1994 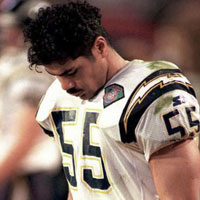 This is a sad story. A story in which a franchise was forced to mourn eight of its players already a few years after their retire (two even while they were still in business), eight leaders of its most glorious team. A story that ties together the incredible coincidences of life, the depression that often surrounds high level sportsmen after retirement and the heavy inheritance which a career in football leaves on its protagonists.

The San Diego Chargers of the 1994 are not so good  considered, out by the odds not only for the Superbowl but little regarded even for a place in the playoffs: the previous year are finished penultimate in their division, with a mediocre record of 8 wins and 8 losses. In their history have never won a title and never reached a Super Bowl, and it looks already distant the gorgeous cavalcade of 1992 when, with 11 wins in their last 12 matches, had reached the playoffs, being eliminated in the second round by the Miami Dolphins.

The beginning of the season, however, goes beyond the most optimistic expectations: the Chargers win their first 6 matches, including 4 away from home, leading their division, the AFC West. The attack is not very explosive but well balanced, relying on qb Stan Humphries and receiver Tony Martin and on a young and very productive running back, Natrone Means. The true strength of the team is the defense, which has its charismatic leader in Junior Seau (pictured), Samoan-born linebacker, great for physicality and passionate style of play (he will have 12 Pro Bowl caps during his career), and a defensive line of great impact with tackle Reuben Davis and Shawn Lee and end Leslie O’Neal.

In the seventh game comes the first defeat, against the Denver Broncos: since that time the Chargers lose 5 of 8 games, at the risk of compromising the good done previously, but the two final victories against the Jets and Steelers confirm them at the top of the division and qualified for the playoffs. In postseason start at home, they win by only one point, 22-21, over the Miami Dolphins and then make their “match of the year” going to beat the Pittsburgh Steelers away, 17-13, in a game dominated by the defenses. The Chargers arrive as well, for the first time in their history, to the Superbowl, but there they loose in front of the stronger San Francisco 49ers, who won’t let them escape, with 49-26. It’s the January 29, 1995.

Since then, unfortunately, the sport story will give way to chronicle: a few months after that game, on 19 June, the linebacker David Griggs was killed at age 28 in a car accident on the Florida Turnpike, after he lost control of his car. Passes less than a year and disappears the second member of that team: running back Rodney Culver, 26 years old, is killed together with his wife in the crash of flight 592 from Miami to Atlanta, crashed leaving no survivors in the Everglades. It’s the May 11, 1996.

Two years later, in July ’98, linebacker Doug Miller, 29 years old, is struck and killed by lightning while on vacation in a campground in Colorado. Ten years later, the May 11, 2008, center Curtis Whitley dies at 39 years old from overdoses; on 15 October of the same year the defensive end Chris Mims is panned from a heart attack at 38 years old, because of the enormous weight gain (226 kg) as a result of post retiring depression. The sixth Charger to disappear prematurely is the previously mentioned Shawn Lee, killed by pneumonia in 44 years, February 26, 2011. The December 8 of the same year it was the turn of linebacker Lewis Bush, struck by a heart attack a few days after his 44th birthday.

The eighth and final death is more symbolic and painful for fans of the Chargers and for lovers of football: in May 2 2012, Junior Seau commits suicide with a gunshot in his California home, without leaving any messages and without any apparent reason. His blood is not found traces of alcohol or drugs, but after extensive tests and on his brain shows signs of head injury in the course of his career, which are the probably basis of sudden gesture of madness.