Superbowl stories 2: Jerry Rice, the world in his hands 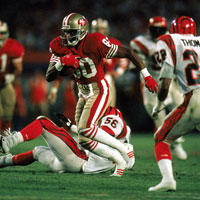 There cannot be one without the other. As Laurel and Hardy, as Starsky and Hutch, as Totò and Peppino, you cannot talk about Joe Montana without talking about Jerry Rice, the best receiver (and possibly player) of all time. The comparison of Rice to Randy Moss appears statistically equivalent when comparing regular season production, but it becomes a non-discussion when one considers their entire careers, where Rice won three Super Bowls. In the role of receiver where takes many hits, being able to boast a twenty-year career (with only 10 games not played for injuries!) at the highest level is an indication of an extraordinary attention to superb athletic training (even in the offseason), and lifestyle off the field. It is these attributes and his two hands of amazing sensitivity, as well as his maniacal accuracy in the execution of schemes, that distinguishes the legendary number 80.

Jerry Lee Rice from Crawford, Mississippi, was born in 1962 and is forced into football by the principal of his high school in exchange for turning a blind eye on the many absences of a student. Snubbed by the major universities, Rice finds a place in tiny Mississippi Valley State, where he puts up mind-boggling numbers in the 1983 and 1984 seasons, establishing the NCAA season record for receptions (102) and yards received (1.450), he also scored 50 touchdowns in three seasons, earning the nickname of “World”, because his supporters argue that there is no ball in the world that their champion is not able to receive. Theoretically he should be one of the top selections at the 1985 NFL draft, but some scouts consider Rice too slow by the NFL standards and this makes only two teams, the Dallas Cowboys and San Francisco 49ers, show serious interest. The 49ers, being the defending champions, are slated to draft after the Cowboys, but they exchange first choices with the New England Patriots, which allowing them to pick ahead of the Cowboys and select Rice.

Rice remains in San Francisco for 15 seasons, from 1985 to 2000, winning three Super Bowls (1988, ’89 and ’94), setting countless records and making a huge contribution to the legendary 49ers “West Coast Offense”, led first by Joe Montana and then Steve Young. In Super Bowl XXIII against the Cincinnati Bengals, his outstanding performance (11 receptions for 215 yards and a touchdown) earned him the MVP of the final. He delivers nothing less in the following Super Bowl, helping with 7 receptions, 148 yards and 3 touchdowns during a blowout 55-10 victory over Denver (MVP will, however, Montana). Rice becomes an even more heroic success in ’94, when, playing much of the game with a dislocated shoulder, he still records 10 receptions, 149 yards and 3 touchdowns.

In 2000, the 49ers considering the explosion of Terrell Owens and the need to remain under the salary cap, allow Rice to be left free to choose a new team: he will move just across the bay in Oakland, with the Raiders, who he will lead to the Super Bowl in 2002, losing badly against the Tampa Bay Buccaneers. In 2004 he moves to the Seattle Seahawks, which make the playoffs once again; the following year he signs with the Denver Broncos, but before the start of the season, he changes his mind and opts for retirement. As a sign of respect, the 49ers then make him sign a one-day contract, to allow him to retire as a player of the team that saw him become a legend.

If we were to list all of the records held by Jerry Rice, this post would remain beyond the boundaries of space, so we limit ourselves to the most significant among them, made even more impressive by the enormous gap that separates Rice from the runner-up: 1,549 receptions (Tony Gonzalez, still active, has 307 less), about 22,895 yards receiving (6,961 more than his former teammate Terrell Owens), 197 touchdown reception (41 in more than Randy Moss), 208 total touchdowns (197 on receptions, 10 rushing and 1 on fumble recovered), 33 TDs ahead of Emmitt Smith, runner-up with 175. The 1,256 points scored by Rice make him the first scorer in the NFL history, excluding kickers, and he is the only receiver in history to boast as many as 14 seasons with at least 1,000 yards receiving. Voted to the Pro Bowl 13 times (continuously from 86 to ’96, then in ’98 and 2002), where he was MVP in the 1995 edition, his number 80 was retired by the 49ers and he was elected into the Hall of Fame on the first ballot in 2010.