Winston Churchill and the Pittsburgh Steelers: “The Steel Curtain” 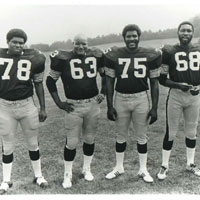 Dwight White, Ernie Holmes, Joe Greene, LC Greenwood: they are, from left to right, pictured here next. They are the “Steel Curtain” of the Pittsburgh Steelers, the NFL rulers of the Seventies, the strongest defensive line in American football history. Deployed by Chuck Noll with the formation of 4-3, The Steel Curtain was formed by Greene and Holmes as tackles, with White and Greenwood as defensive ends.

The full quartet played together from 1972 to ’77, the year in which Holmes left the Steelers for the New England Patriots. The Steel Curtain itself won the Super Bowl in 1975 and ’76 but, except for Greene, the other three members were the protagonists of two consecutive wins in 1979 and ’80. Their nickname was created in 1971 by the imagination of a listener to a radio station in Pittsburgh, Gregory Konz, inspired by the famous definition of “Iron Curtain” given by the British Prime Minister, Winston Churchill, regarding the separation of the two areas of influence (Soviet and Allied) applied in Europe at the end of the Second World War.

The golden year of this unique quartet is 1976 when, after a poor start of the season with four defeats in the first 5 games due to injury of QB Terry Bradshaw, the defense, led by the Steel Curtain, literally take the whole team on their shoulders, leading up to the title and recording statistical numbers unmatched. In the following nine games, the Steelers defense held opponents to zero points five times, allowing in the other four games just two touchdowns and five field goals for an average of 3.1 points allowed per game! In the playoffs the music will change slightly, with the Steelers able to limit to 10 points scored the offenses of Baltimore Colts and Oakland Raiders; in the Super Bowl the Dallas Cowboys will lead 10-7 at the beginning of the last quarter, before the Pittsburgh comeback, crowned by the famous 64-yards reception of future Hall of Famer Lynn Swann (the play that earned him the MVP award of the game), with the final score 21 to 17.

Regarding the Hall of Fame, leader of that team (and the Steelers 1969-1991) was legendary coach Chuck Noll, who still holds the record for most Super Bowl wins by a coach (4) and entered the Hall of Fame in 1993. The key to his success? An extraordinary acumen in choosing college players in the draft, a talent that will allow him to populate of champions the roster of his team: the first three years Noll chooses Joe Greene (the strongest, individually, of the Steel Curtain), followed by Terry Bradshaw and Franco Harris, all future Hall of Famers. The record unmatched even today, however, is that of 1974, in which Noll’s draft pick, in the first five rounds, yield four future Hall of Famers: receivers Swann and Stallworth, linebacker Lambert and the legendary center Mike Webster. An insight and expertise to the limits of the capacity of divination.

Returning to the Steel Curtain, Joe Greene (the only one still alive of the four) is the one that will collect more honors: 4 titles, 10 Pro Bowl, Hall of Famer, Rookie of the Year 1969, 2 times best defensive player of the year, and his number 75 was retired by the Steelers. LC Greenwood (# 68), in spite of the 4 titles won and 6 Pro Bowl played, will be twice a finalist for the Hall of Fame, but will never able to enter. The same exclusion from the Hall of Fame will conclude for teammates Ernie Holmes (# 63) and Dwight White (# 78). Holmes, who died in a car accident in 2008, was renowned for its fiery and wild character that caused him not a few problems, in and off of the field: he ended up on the front pages of the newspapers because of the shootout that saw him involved in ’73, when Holmes tried to break down in gunfire a police helicopter chasing him for speeding (!). White, however, owes his ominous nickname “Mad Dog” to the extraordinary intensity of his game, which led him to realize 46 QB sacks in 126 games (although at that time the sack was not yet an official statistic). He deserves to be remembered for a story that occurred on the eve of the Super Bowl in 1975, when White spent a week in the hospital to cure pneumonia, losing more than 22 pounds. His participation in the game seemed obviously out of the question, until Chuck Noll saw his player show up in the locker room of Tulane Stadium in New Orleans, a few hours before the game. Dwight White played that game and played great, scoring 2 points with a safety in the second quarter. How many stories from the definition of Churchill Sir, do you?