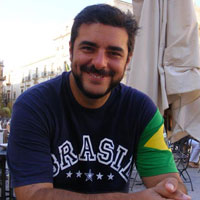 Gianluca was born in 1974 in Rome. Until 2002, he wrote almost exclusively of volleyball, on newspapers and for the Fipav Press Office, then switched to advertising, as a copywriter, an marketing as strategical consultant. Since 2001, when published privately his first collection of poems, “Di terra e di vento”, he wrote novels, short stories and, of course, poetry.
In 2013 Gianluca became a self-publisher, publishing his first police novel (Sangue chiama sangue), the opening chapter of the saga starring the detective Noah Parker, and his fifth collection of poems (Sogni capovolti). He also published, thanks to translations of Barbara Francini, an anthology of English poems (In depth), his first publication not in Italian.  In June 2014 Gianluca published the second chapter of the Noah Parker saga, “Fantasmi per l’Undicesimo Distretto”, and the third, “La regola del silenzio”, in December 2015. All his books are sold through Amazon.
The only exception from creative writing, before this blog, was represented by the encyclopedia “Garzantina dello Sport”, in 2009, where he wrote about a lot of disciplines, such as Motor Racing, Volleyball, Beach Volleyball, Baseball, Ice Hockey and American Football.  In May 2013 he created this blog to combine his two greatest passions: writing and sports.
From the beginning of 2015 Gianluca teaches a course of Global Sports Marketing for U.S. students at the International Institute Lorenzo de’ Medici, in Rome and Florence. One of his first students nicknamed him as the “Professor Guru”.