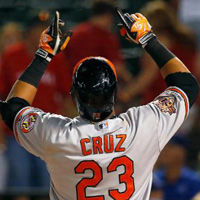 So far the playoffs have not treated me kindly. In the divisional round I went a lackluster 1 for 4 with my predictions. While the Giants won like I predicted, the Cardinals made Clayton Kershaw look mortal, the Orioles beat up the Tigers(especially their bullpen), and the Royals shocked the world and continued their run as baseball’s Cinderella story.  Here are my (hopefully more accurate) predictions for the ALCS and NLCS.

American League Championship Series: Baltimore Orioles vs. Kansas City Royals
Well, if in the beginning of the year you said that the O’s would play the Royals for a chance to go to the World Series, then you are crazy or you are lying. This is a battle of 2 small market underdogs where it is anyone’s series to take. My head says that the Orioles were the better team all year, but my heart wants this wild adventure to continue for Kansas City.
Final Prediction: Royals in 6

National League Championship Series: San Francisco Giants vs. St. Louis Cardinals
Completely opposite of the ALCS, this matchup should come as no surprise. The Cardinals are entering their 4th straight NLCS and the Giants are looking to get to their 3rd World Series in 5 years. Because of the recent success of both teams, saying with certainty which team will take this series is nearly impossible. That being said, I will give the edge to the Cardinals simply for the fact that if this series goes the distance, both games 6 and 7 will be in their building.
Final Prediction: Cardinals in 7