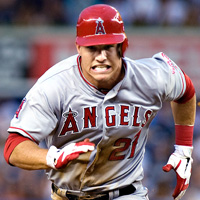 Detroit Tigers vs. Baltimore Orioles
This series is very tough to predict. The Orioles have surprised again this year, but I just can’t pick against Detroit’s star power and experience. Expect the Orioles to put up a fight, but don’t expect them to overcome the power pitching of Scherzer and Price and the power hitting of Cabrera, Victor Martinez, and J.D. Martinez. The only way I see the Orioles pulling it off is if they can get to Detroit’s bullpen early, as it has been one of the worst in baseball this season.
Final Prediction: Tigers in 4

LAA Angels vs. KC Royals
The Royals, who are making their first postseason appearance since 1985, have been an amazing story this year. They also just won one of the greatest postseason games in recent memory to get this far. That being said, the Angels have looked like an absolute powerhouse since the All-Star break and Mike Trout appears poised to take Derek Jeter’s place as baseball’s postseason legend and golden child.
Final Prediction: Angels in 3

St. Louis Cardinals vs. LA Dodgers
Only 2 words for this series, Clayton Kershaw. Kershaw just finished one of the best seasons in MLB history by going 21-3 with a 1.77 ERA. If the Cardinals are going to have any chance, they are most likely going to have to win the 3 games Kershaw doesn’t pitch.
Final Prediction: Dodgers in 4