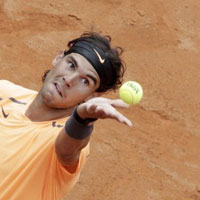 (June 12th, 2013)
I was watching the Roland Garros’ male final last Sunday and I was deadly bored by an already written match ending, between two players so similar in their style but also quite different in their global values. It’s an old Tennis’ rule good for any historical age: if you want to have chances against a rival better than you, you need different solutions from his. If, unfortunately, their skills are the same, the weaker player (physically, technically, mentally and overall) has no way out, expecially in a 3 on 5 sets match.

Therefore, while an unfortunate Ferrer was hoplessly sweating and breathing under Nadal’s strikes, my head became to recall a Federer-Nadal match that happened few years ago, at the time when Rafa was the only one able to annoy the Divine one. From there it was easy for me to think about at the unsolved question: who’s better, Federer or Nadal? A question that takes me to another, more difficult, one: just as in an Aristotelean syllogism, the better player could be defined as the strongest player of our modern era? An IQ puzzle where it could be said many things and their opposite.

All these pros and cons went on for some time but it looks like there’s no solution. Then a flash came, I remembered a match – perhaps the most beautiful match I’ve ever seen – and this memory helped me to see more clearly: the 2008 Wimbledon final match, won by the Spanish player 9-7 in the 5th set. That set means everything, Nadal was able to win at least once in Federer’s habitat, but not the same can’t be said for Federer: his only won in Paris, in 2009, happened because Nadal lost to Soderling during the early stages, and the same Soderling was beaten easily by Federer in the final match. Otherwise, Nadal in 2008, won with Federer in the final match of the Swiss player’s own tournament, a place where he had won 41 consecutive matches. And I won’t mention the second Nadal’s championship two years later because he hasn’t played against his rival.

I’m watching TV again, and while I see the brute and mean moves of the two players, I miss Roger Federer. To the tennis lovers it looked like a miracle, ten years ago, watching those classic, smooth strokes coming to life again in a 21st century player, a player able to give speed or class to those strokes, reminding us of Laver or McEnroe. Federer and his racket were able to become a pagan deity of beauty, mighty and delicate, and he must be considered as “the best tennis player, ever” with all the meanings that sentence signifies. However Nadal has beaten him, went in the same Olympus and took him down for a while, he was panting, sweating, wearing out his muscles, shrieking his mind, dirtying his hand, bruising his knees: Nadal has no divine features, but he’s extradorinarily human, generous and possesses an iron will. That’s why I think Nadal is better than Federer.

“Therefore, to your opinion Nadal should be considered the all time best, right?” Aristoteles could ask me. On clay there are no doubts, I’d answer, but considering all fields I don’t think so. “So what?” “Federer”, I’d say. “The best player ever can’t live near someone who’s better than him” he’d answer very perplexed. Well, I know, my friend, these are hard times for syllogisms.