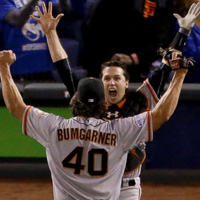 Madison Bumgarner cemented himself as one of the greatest pitchers in World Series history as the San Francisco Giants held on to beat the Kansas City Royals in Game 7 on Wednesday night. In the 3 World Series he has pitched in (which totals to 36 innings), Bumgarner is 4-0 with a .25 ERA. Having now won 3 of the last 5 World Series many consider them to be baseball’s most recent dynasty. With star third baseman Pablo Sandoval set to test free agency, it is hard to guess what the Giants will look like next year. That being said, as long as they are able to keep a steady pitching staff behind Bumgarner, they should be competitive for years to come.

The future of the Royals, on the other hand, remains a huge uncertainty. No one expected them to even contend let alone make it to Game 7 of the World Series this year. Ace starting pitcher, James Shields, who had a miserable postseason, is likely to leave in free agency. It is also difficult to tell how this young team will handle their recent success moving forward. Either way, both of these teams gave us a very entertaining World Series that will be remembered for years to come.